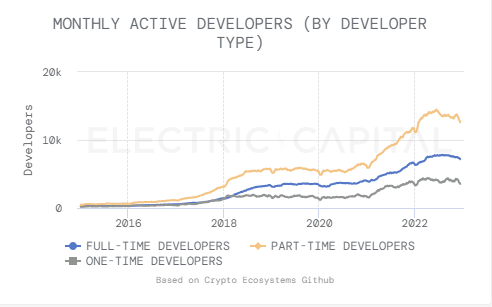 BitcoinMonthly active developers grew 5% YoY, despite a more than 70% decline in crypto prices in 2022, according to a recent crypto developer report from venture firm Electric Capital.

“Full-Time developer growth is the most important growth signal to track because they contribute 76% of code commits.”

Further, there were 471,000 monthly code commits toward open-source crypto.

Other networks are emerging beyond Bitcoin and Ethereum

With 1,873 full-time developers, Ether (ETH) remains the largest crypto ecosystem.  However, about 72% of monthly active developers work outside of the Bitcoin and Ethereum ecosystems, according to Electric Capital’s data.

Polygon, NEAR, and Solana have all grown 40% YoY and have more than 500 monthly active developers combined. Further, Sui, Aptos, Starknet, Mina, Osmosis, Hedera, Optimism, and Arbitrum grew 50%+ YoY and had over 100 active developers.

There has been a 240% increase in DeFi protocol developers since ‘DeFi summer’ – 50% of whom are outside Ethereum. In addition, there have been more than 900 active NFT developers since 2021 – a 299% increase.

In total, the number of crypto developers has nearly doubled since Electric Capital released its first developer report in August 2019. The report stated:

The firm analyzed 250 million code commits for the 2022 report, including additions, revisions, and other modifications to crypto-specific open-source software. The results consider only crypto programs performed on public projects and exclude private projects for crypto companies.