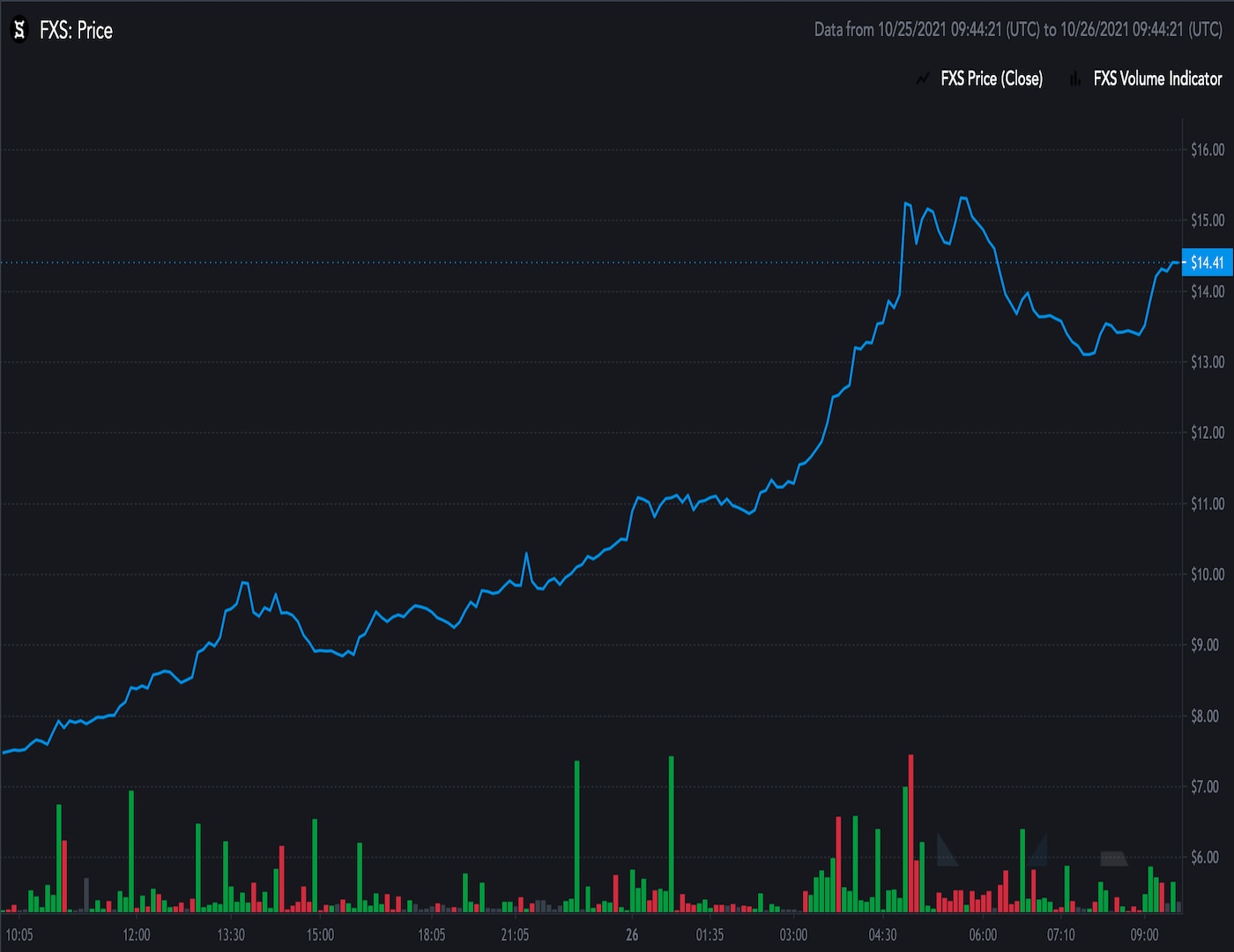 There is never a dull moment in the crypto market. While bitcoin and the broader crypto market appear to be in stasis at press time, FXS, a governance token of a lesser-known fractional algorithmic stablecoin protocol Frax, has jumped 80% in 24-hour. You read it right; in a single day, the token has gained nearly […]

There is never a dull moment in the crypto market.

While bitcoin and the broader crypto market appear to be in stasis at press time, FXS, a governance token of a lesser-known fractional algorithmic stablecoin protocol Frax, has jumped 80% in 24-hour. You read it right; in a single day, the token has gained nearly twice more than what bitcoin has done so far this month and is now trading near $14.40, according to data provided by Messari.

“People seem to be buying FXS from an already limited circulating supply to earn juicy yields from Tokemak’s dedicated reactor launch,” Alex Svanevik, CEO of blockchain data company Nansen told CoinDesk in a Telegram chat. “75% of all circulating FXS [16,209,404.70] is locked away for an average of 1.08 years, circulating supply is heavily locked as veFXS (similar to veCRV).”

The Ethereum-based Frax stablecoin is partially collateralized, backed by both asset collateralization and cryptographic algorithms. The protocol utilizes two different assets: the Frax (FRAX) stablecoin built to maintain 1:1 peg to the U.S. dollar and the Frax Shares (FXS) governance and utility token.

A user can mint FRAX by supplying stablecoin USDC as collateral, along with FXS token in amounts set by the Frax collateral ratio (CR). For instance, assuming a 50% collateral ratio, one FRAX can be generated by providing $0.50 USDC and $0.50 worth of FXS. On redemption, the user receives $0.50 USDC and $0.50 of FXS in exchange for every FRAX stablecoin they provided. So, the demand for FXS is directly tied to investor appetite for FRAX.

Wow, someone locked a lot of $FXS today, almost 75% of FXS circulating supply is locked up as veFXS!👀 #TheFXSLockening🔒 pic.twitter.com/uMEyHVn8c8

Generalized aggregator for decentralized exchanges Tokemak launched an FXS-dedicated token reactor on Tuesday, where FXS holders can deposit their coins in return for yield in the form of TOKE or tFXS tokens. These tFXS tokens represent the user’s claim on the assets deposited and can be redeemed anytime.

Further, optimism surrounding the impending launch of Frax V3, considered by protocol founder Sam Kazemian as analogous to ETH 2.0, may be powering the FXS token higher.

“[With] upcoming Frax v3 – veFXS holders will directly control the algorithmic market operations (AMO) in terms of how FRAX supply expands and contracts when it comes to the peg,” Svanevik said. “So monetary policy will be done within the protocol and controlled by the veFXS holders, incentivizing more stability than just the old farming seigniorage model.”

“Users may lock up their FXS for up to 4 years for four times the amount of veFXS (e.g. 100 FXS locked for four years returns 400 veFXS). veFXS is not a transferable token nor does it trade on liquid markets. It is more akin to an account-based point system that signifies the vesting duration of the wallet’s locked FXS tokens within the protocol,” Frax Finance’s explainer says.