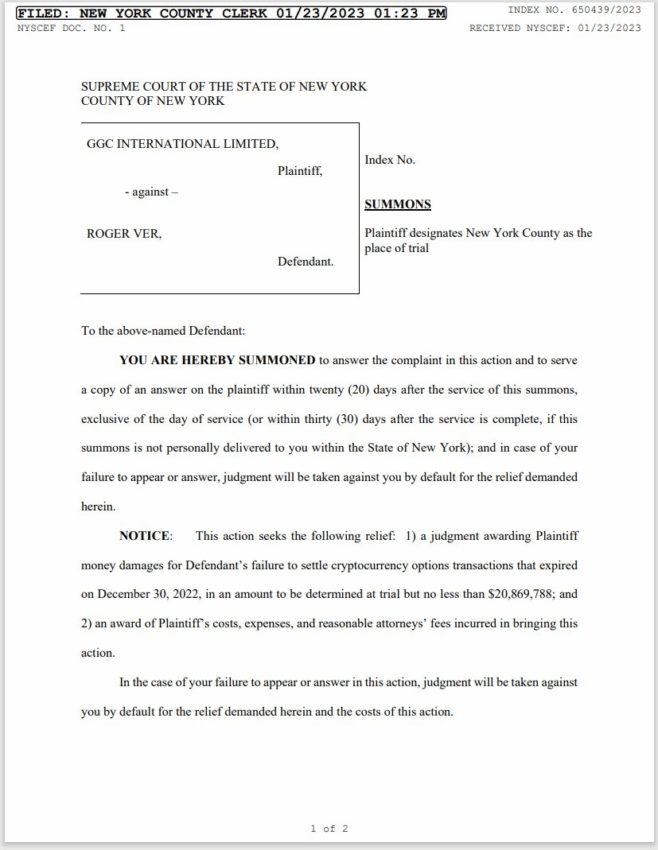 Crypto lending firm Genesis is taking on Bitcoin Cash proponent Roger Ver, according to a court filing published on Jan. 23. The company is going after Ver for his “failure to settle cryptocurrency options transactions” that expired on Dec. 30, 2022. The total amount of the options is approximately $20.8 million.

The lawsuit was filed in the New York State Supreme Court in Manhattan. Ver does not seem to have responded to the case yet, and Genesis has not offered any updates on the matter either. The British Virgin Islands-domiciled affiliate of Genesis submitted the filing.

Ver has 20 days to answer the summons. If he fails to do so, he will have to pay the total cost of reparations by default.

It’s a moderate development in the Genesis saga, which has roiled the industry and suggests more market uncertainty. Ver, on his part, has seen a fair amount of trouble in recent times. He gave up his United States citizenship to become a citizen of Saints Kitts and Nevis in 2014.

Roger Ver was in hot water last year as well, that time for failing to pay $47 million in margin debt to crypto exchange CoinFlex. The Seychelles-based exchange stated that it had made a settlement arrangement with Ver.

The arrangement allowed Ver to use his “personal creditworthiness” to prevent the liquidation of his account, although it had fallen below the maintenance level. CoinFLEX followed up with a lawsuit focused on recovering $84 million in losses after the liquidation.

CoinFLEX, like other crypto companies, was hit hard by the crypto winter. This litigation process is expected to end this year, with the judgment to take place in Hong Kong.

As for Genesis, it continues to struggle through its bankruptcy proceedings. The latest news is that there is a certain amount of confidence that it could resolve its dispute with creditors this week, according to lawyers for the firm. They also state that it can exit the Chapter 11 proceedings in late May.

The lender could possibly hand out $3.4 billion in customer funds, which would go some way towards easing the struggle. Acting CEO Derar Islim earlier said that the bankruptcy process would be quick and efficient, which would soothe creditors.