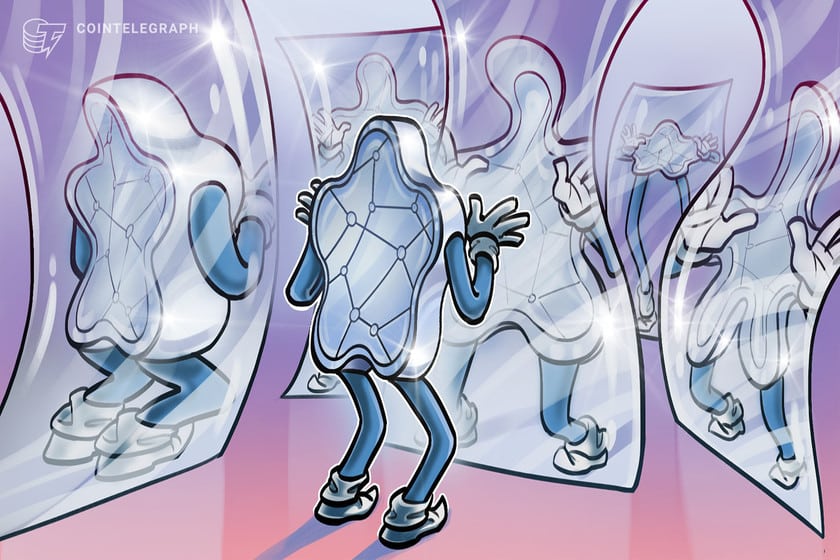 Donald Trump’s NFT collection started out strong but then started looking lifeless up until a few days ago.

Compared to Jan. 17 sales volumes, Jan 18. and Jan. 19 saw spikes of 800% and 600% respectively, according to market metrics aggregator Cryptoslam.

Some pundits believe the renewed interest could be due to his imminent return to social media networks, following reports that the former president was seeking to rejoin Facebook and Twitter ahead of the 2024 presidential election campaign.

NFT Watch: Trump Digital Trading Cards see 88% increase in floor price in the past 24 hours following news of his plans to return to Twitter.

The collection of 45,000 self-themed trading cards was launched on Dec. 15 and initially priced at $99 each.

Buyers of the collection were automatically entered into a sweepstake which included “1000s of prizes,” including one-on-one dinners, zoom calls and rounds of golf with the former President.

They quickly sold out and recorded daily sales volumes of over $3.5 million, but then plummeted to a baseline of around $26,000 by the end of 2022.

Wow not only is Yuga Labs blacklisting Blur they have also blacklisted LooksRare, SudoSwap, and NFTX. Royalty war is heating up. https://t.co/afAnovk9ND pic.twitter.com/UEd3dtw0w4

The NFT project was first announced on Jan. 12 and became available for minting on Jan. 17.

Only Bored Ape Yacht Club or Mutant Ape Yacht Club holders are able to mint the Sewer Pass, which acts as an entry pass to its new skill-based NFT game, called Dookey Dash.

The sewer is open. Sewer Pass holders, go to https://t.co/ItKXBwrs9t to Dookey Dash as many times as you want until February 8th. pic.twitter.com/3h0qaKggKJ

A royalty is a fee which is taken from the price of a sale and sent to the content creator, and Yuga Labs has been vocal about its opposition to broader shifts within the market to royalty-free marketplaces.

Based on Yuga Labs’ 5% creator royalty fee, secondary sales for the collection have already netted them revenues of over $1.2 million.

Virtual pet website Neopets — which was popular throughout the 2000s — has raised $4 million from the gaming and blockchain investors with plans to create its own metaverse.

According to the announcement, ‘Neopets Metaverse’ will be a play-and-earn virtual pet game based on the original, and would allow players to “raise, care for, customize, and battle with their Neopets” on the blockchain.

In the announcement, HashKey Capital’s investment director Xao Xiao notes: “We believe that GameFi plays a crucial role in the larger metaverse narrative, serving as the interactive layer in the value chain and a key driver of traffic across web 2 and web 3.”

Neopets was founded in 1999, and the company is hopeful that Neopets Metaverse will bring “the magic of Neopets in a positively fresh light to old-time players, as well as attracting and nurturing a new generation of Neopians.”

The community has had an underwhelming response to the announcement, with some suggesting its previous effort at creating a Neopets metaverse had been a flop.

actually hilarious news on the migration considering being based on solana was one of their main selling points to avoid the environmental controversy. desperate rats trying to squeeze something out of a big fail

The company had initially launched an NFT collection using the Solana network on Nov. 12, 2012, which allegedly went so poorly it resulted in the hashtag #NoNeoNFT trending on Twitter.

A team of researchers from the National University of Singapore (NUS) have created a pair of haptic gloves which it believes can bring the sensation of touch to the metaverse.

The invention, called the HaptGlove, is an untethered and lightweight glove that will allow metaverse users to interact with virtual objects in a much more realistic fashion by conveying touch and grip.

When users put on the HaptGlove, they are able to sense when their virtual avatar’s hand touches something, as well as tell how hard and what shape the object is as a result of the HaptGlove restricting the user’s finger positions.

NUS claims that the HaptGlove will also be useful in other areas, such as education and medicine, by allowing surgeons to prepare for surgeries in a “hyper-realistic environment” or giving students a hand-on learning experience.

While the concept of haptic gloves is not new, for example Meta is working on their own version of them, NUS claim that theirs is able to provide users with a much more realistic sense of touch compared to others that exist today.

On Jan. 18 NFT marketplace Rarible announced that it would be expanding its marketplace builder to include Polygon-based NFT collections. The builder will allow artists and projects to customize their own marketplace, with its CEO Alexei Falin believing that community marketplaces would become the future of NFT buying and selling.

Crypto exchange Binance announced on Jan. 19 that it would be tightening its rules for NFT listings, requiring sellers to complete Know Your Customer (KYC) verification and have at least two followers before listing on the platform. The firm plans to “periodically review” NFT listings that do not “meet its standards” and recommend them for delisting.