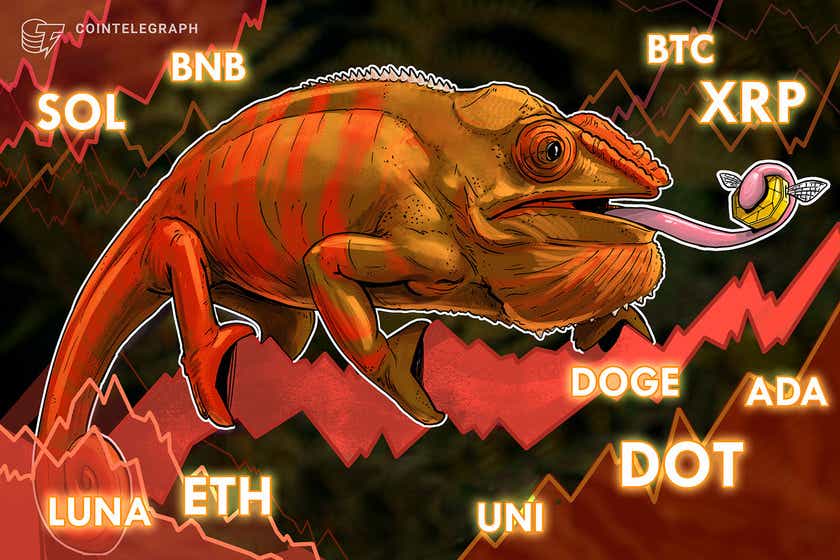 BTC and ETH reversed course as both assets search for underlying support, suggesting that bears are attempting to trap over-leveraged bulls. Bitcoin (BTC) and Ether (ETH) have both witnessed aggressive profit-booking after hitting their respective new all-time high. This suggests that traders who had bought on rumors of a Bitcoin exchange-traded fund booked profits following […]

BTC and ETH reversed course as both assets search for underlying support, suggesting that bears are attempting to trap over-leveraged bulls.

Bitcoin (BTC) and Ether (ETH) have both witnessed aggressive profit-booking after hitting their respective new all-time high. This suggests that traders who had bought on rumors of a Bitcoin exchange-traded fund booked profits following the successful launch of the ProShares’ Bitcoin Strategy exchange-traded fund (ETF) (BITO).

The bulls tried to stage a recovery in Bitcoin after the launch of the second BTC futures-linked ETF by digital asset manager Valkyrie on Oct. 22 but met with strong selling pressure at higher levels. The selling has pulled the greed level on the Crypto Fear and Greed Index from 84 on Oct. 21 to 75 on Oct. 22.

JPMorgan Chase strategists said in a note that BITO was “unlikely to trigger a new phase of significantly more fresh capital entering Bitcoin” and the hype in the product may wane after a week. The strategists pointed out that capital was shifting away from gold ETFs into Bitcoin funds since September and that “supports a bullish outlook for Bitcoin into year-end.”

Could Bitcoin and Ether witness a deep correction and what are the critical support levels to watch out for? Let’s study the charts of the top 10 cryptocurrencies to find out.

Bitcoin made a new all-time high at $67,000 on Oct. 20 but the bulls could not sustain the breakout as bears pulled the price back below the breakout level at $64,854 on Oct. 21. This suggests that sellers are attempting to trap the aggressive bulls.

The bears tried to start a recovery on Oct. 22 but the long wick on the day’s candlestick shows that traders are selling on minor rallies. The strong support to watch on the downside is the 20-day exponential moving average (EMA) ($57,778).

If the price rebounds off this support, it will suggest that sentiment remains positive and traders are buying on dips. That will increase the possibility of a break above the overhead resistance zone between $64,854 and $67,000. The pair could then rally to $75,000.

On the other hand, if the price breaks below the 20-day EMA, the selling may accelerate and the BTC/USDT pair could drop to the 50-day simple moving average (SMA) ($50,496).

However, the long wick and the negative close on Oct. 21 show that traders may have sold aggressively near the all-time high. The bears are attempting to sustain the price below the breakout level at $4,027.88.

The upsloping 20-day EMA ($3,712) and the relative strength index (RSI) in the positive zone suggest that bulls remain in command. If the price bounces off the current level, the bulls will make one more attempt to thrust the ETH/USDT pair to a new all-time high.

A break and close below the neckline of the inverse head and shoulders (H&S) pattern could signal the possible start of a deeper correction to $3,200.

If the price bounces off the 20-day EMA, the BNB/USDT pair could make one more attempt to clear the overhead hurdle at $518.90. If they manage to do that, the pair could rally toward the pattern target at $554.

The rising 20-day EMA and the RSI in the positive zone indicate that bulls have the upper hand. This advantage could shift in favor of the bears if the price turns down and slips below the moving averages. The selling could intensify further on a break below $392.20.

Cardano (ADA) broke above the 20-day EMA ($2.18) on Oct. 21 but the bulls could not push the price above the resistance line of the symmetrical triangle pattern. This indicates that bears are vigorously defending this level.

The sellers are currently trying to sink the price below the support line of the triangle. If they succeed, it will suggest that the equilibrium between the bulls and the bears has resolved to the downside.

The ADA/USDT pair could then slide to the strong support at $1.87. A break and close below this level could result in panic selling. The break and close above the triangle will be the first indication that bulls are back in the game. The pair may then rally to $2.47 and pick up momentum above this resistance.

Ripple (XRP) returned from the downtrend line on Oct. 21, indicating that bears are defending this level aggressively. On the downside, the bulls are attempting to sustain the price above the moving averages.

If the price rebounds off the current level, the bulls will again try to push the XRP/USDT pair above the downtrend line. If they manage to do that, the pair could rally to $1.41. A break and close above this resistance could push the price to $1.66.

The flat moving averages and the RSI near the midpoint suggest the pair may remain range-bound for a few days. A break and close below $1 will clear the path for a possible drop to the strong support at $0.85.

Solana (SOL) broke and closed above the overhead resistance zone between $171.47 and $177.79 on Oct. 21. This completed a bullish ascending triangle pattern, which has a target objective of $226.94.

The bears may pose a stiff challenge at the current all-time high at $216 but the strong momentum of the past three days shows that bulls are aggressively buying at higher levels. A break and close above $216 will signal the resumption of the uptrend.

Conversely, if the SOL/USDT pair turns down from $216, a retest of $177.79 is possible. If the price rebounds off this level, it will indicate that bulls continue to buy on dips. The bulls will then again try to resume the uptrend.

A break and close below $171.47 will signal that the bullish momentum has possibly weakened.

Polkadot (DOT) broke above the immediate resistance at $44.78 on Oct. 20, indicating the possible resumption of the up-move. The bears tried to trap the aggressive bulls by pulling the price toward the breakout level at $39.02 on Oct. 21 but buyers had other plans.

The upsloping 20-day EMA ($38.88) and the RSI near the overbought zone suggest that bulls have the upper hand. If buyers sustain the price above $45, the DOT/USDT pair could retest the all-time high at $49.78.

This level may act as a stiff hurdle but if bulls do not give up much ground, the pair could extend the up-move to $53.90. The bears will have to pull the price below the breakout level at $38.77 to turn the advantage in their favor. The pair could then decline to the 50-day SMA ($34.07).

Dogecoin (DOGE) continues to face stiff resistance at the downtrend line, indicating that bears are defending this level aggressively. A minor positive is that bulls have not allowed the price to break and sustain below the 20-day EMA ($0.23).

If bulls fail to push and sustain the price above the downtrend line, the likelihood of a break below the 20-day EMA will increase. That could pull the price to the strong support zone at $0.21 to $0.19. The bulls are expected to defend this zone vigorously.

A strong rebound off this support zone will point to a possible range-bound action between $0.19 and $0.27 for a few days. The trend will tilt in favor of the bulls if the DOGE/USDT pair rises and closes above $0.27. The pair could thereafter rise to $0.32 and then to $0.35.

Contrary to this assumption, if the price turns down from the current level or the overhead resistance and breaks below the 20-day EMA ($39.18), the decline could extend to $34.86. The selling could intensify below $32.50.

Uniswap (UNI) broke and closed above the neckline of the inverse H&S pattern on Oct. 20 but the bulls could not build on this advantage. The bears pulled the price back below the neckline on Oct. 21.

However, a minor positive is that bulls did not allow the price to slip below the 20-day EMA ($25.46). This shows that buyers are accumulating on every minor dip. If bulls drive the price above $28, the UNI/USDT pair could jump to $31.41.

This level may again act as a stiff resistance but if bulls overcome this barrier, the pair could rally to the pattern target at $36.98. Conversely, a break below the moving averages could pull the price down to the strong support at $22. The short-term trend will turn negative if this support is breached.