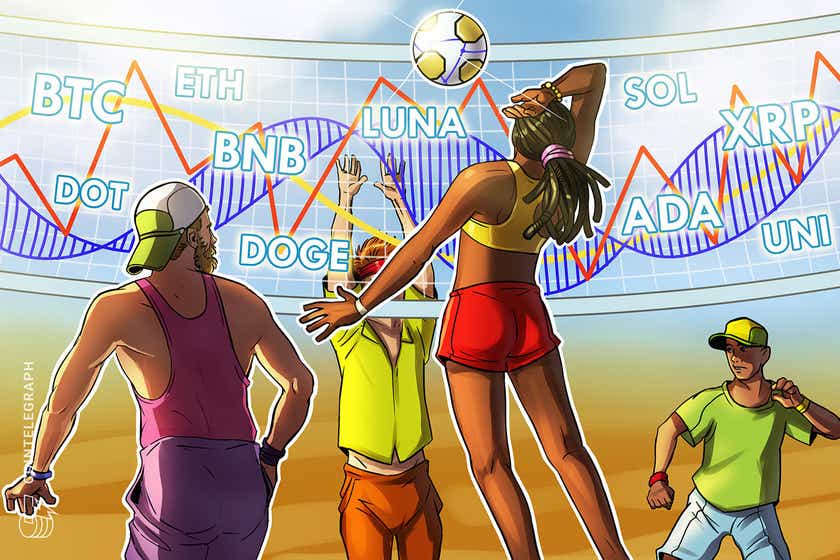 Bitcoin and several altcoins are attempting to resume their uptrend, but higher levels are likely to witness strong resistance from the bears. Bitcoin (BTC) has recovered from the dip below $60,000, indicating strong buying at lower levels. CryptoQuant CEO Ki Young Ju said that investors used market orders to buy $840 million worth of Bitcoin […]

Bitcoin and several altcoins are attempting to resume their uptrend, but higher levels are likely to witness strong resistance from the bears.

Bitcoin (BTC) has recovered from the dip below $60,000, indicating strong buying at lower levels. CryptoQuant CEO Ki Young Ju said that investors used market orders to buy $840 million worth of Bitcoin futures on dips to $60,000.

This suggests that analysts are positive for the rest of the year and anticipate the bull run to continue. Analyst TechDev believes that Bitcoin’s price action in 2021 is following the same trajectory as in 2017. If that were to happen, Bitcoin could be getting ready for a sharp move higher in the remainder of the year.

In a step that could boost the adoption of cryptocurrencies further, Mastercard is expected to announce that its banking partners and merchants on its payment networks may soon be able to add crypto services. Mastercard has tied up with the Bakkt platform to enable its United States-based customers to buy, sell and hold cryptocurrencies through custodial wallets.

Is the correction in Bitcoin over and could it rise to a new all-time high? If that happens, will the altcoins also resume their uptrends? Let’s study the charts of the top 10 cryptocurrencies to find out.

The long tail on the Oct. 23 and Oct. 24 candlestick suggests that bulls are attempting to defend the psychologically important support at $60,000. Bitcoin has resumed its up-move and will now attempt to challenge the overhead resistance zone at $64,854 to $67,000.

The rising 20-day exponential moving average (EMA) ($58,794) and the relative strength index (RSI) in the positive zone suggest that bulls are in control. The bullish momentum could pick up further if the BTC/USDT pair closes above $67,000.

This bullish view will invalidate if the price once again turns down from the overhead resistance and plummets below the 20-day EMA. That could result in panic selling by short-term traders and may pull the price down to the 50-day simple moving average (SMA) ($51,160).

Ether (ETH) dropped below $4,027.88 on Oct. 22 but the bears could not capitalize on this advantage. The bulls quickly reclaimed the level on Oct. 23, indicating strong buying on dips.

A break and close above this resistance could start the pair’s journey toward the psychologically important level at $5,000.

Contrary to this assumption, if the price turns down from the current level, the bears will try to pull the pair below the 20-day EMA ($3,826). This is the first sign that the bullish momentum may be weakening. The pair could then drop to the 50-day SMA ($3,473).

The bulls are buying on dips to the 20-day EMA ($461), indicating that the sentiment remains positive. Binance Coin (BNB) could now rise to the stiff overhead resistance at $518.90.

A breakout and close above $518.90 will suggest the start of a new up-move. The BNB/USDT pair could then attempt to rally to the pattern target at $554. A break above this level could push the pair to $600.

The upsloping 20-day EMA and the RSI in the positive zone indicate the path of least resistance is to the upside. This bullish view will invalidate if the price turns down from the current level or the overhead resistance and plummets below the 50-day SMA ($423).

Cardano (ADA) broke and closed marginally below the support line of the symmetrical triangle pattern on Oct. 24. This suggests that the uncertainty of the past few days may be resolving in favor of the bears.

If bears pull the price below $1.09, the ADA/USDT pair could start its southward journey toward the strong support at $1.87. The marginally downsloping 20-day EMA and the RSI just below the midpoint suggest that sellers have a slight advantage.

This negative view will invalidate if the price turns up from the current level and breaks above the resistance line of the triangle. That could trap the aggressive bears, resulting in a rally to $2.47 and then to the pattern target at $2.80.

Ripple (XRP) slipped below the 20-day EMA ($1.09) on Oct. 24 but the long tail on the day’s candlestick suggests that bulls are buying at lower levels. The buyers will now try to push the price above the downtrend line.

If they manage to do that, it will suggest a change in the short-term trend. The XRP/USDT pair could then rally to $1.24 where the bears may again mount a stiff resistance. If the price turns down from this level, the pair could remain range-bound between $1.24 and $1 for a few days.

The long tail on Solana’s (SOL) Oct. 24 candlestick shows that traders aggressively bought at lower levels. Sustained buying has pushed the price to a new all-time high at $218.93 on Oct. 25.

If bulls sustain the price above $216, the SOL/USDT pair could start its journey toward $239.83. The rising 20-day EMA ($173) and the RSI in the overbought territory indicate that buyers have the upper hand.

However, if the price turns down from the current level, it will suggest that bears are in no mood to relent. The pair could then drop to $177.70 and remain range-bound between these levels for a few days.

A break and close below $171.47 will be the first sign of weakness, which could pull the pair down to the trendline.

Polkadot’s (DOT) shallow correction from $46.39 suggests that bulls are not rushing to the exit as they anticipate the up-move to continue. The rising moving averages and the RSI above 63 indicate that bulls are in command.

The buyers will now try to push the price above $46.39 and retest the all-time high at $49.78. A breakout and close above this resistance could signal the start of a new uptrend, which has a target objective at $53.90.

If the price turns down from the current level or the overhead resistance, it will suggest that demand dries up at higher levels. The bears will then attempt to pull the DOT/USDT pair below $38.77. If that happens, the decline could extend to the 50-day SMA ($34.65).

Related: Bitcoin charges toward $64K as Tesla ATH boosts Elon Musk to $250B net worth

Dogecoin’s (DOGE) tight range trading between the downtrend line and the 20-day EMA ($0.24) resolved to the upside on Oct. 24. The strong momentum on the day pushed the price above the overhead resistance at $0.27 but the bulls are struggling to sustain the higher levels. This suggests that bears are defending the overhead resistance.

The DOGE/USDT pair could now drop to the 20-day EMA. If the price rebounds off this support, it will suggest that the sentiment has turned positive and traders are buying on dips. That will increase the likelihood of a break above $0.28.

If that happens, the pair could climb to $0.32 and then $0.35. Conversely, if bears pull the price below the moving averages, the pair could drop to the strong support zone at $0.21 to $0.19. A bounce off this zone could keep the pair range-bound for a few days.

Terra protocol’s LUNA token turned down from the overhead resistance at $45.01 on Oct. 22 and bounced off the 20-day EMA ($40.03) on Oct. 24, indicating that the price is stuck between these two levels.

The gradually upsloping moving averages and the RSI in the positive territory indicate a slight advantage to buyers. If bulls thrust and sustain the price above $45.01, the LUNA/USDT pair could challenge the all-time high at $49.54.

A break and close above this resistance could clear the path for a further rally to $60.57. Alternatively, a drop below $40 could sink the pair to the strong support zone at $34.86 to $32.50. The selling could accelerate if this zone cracks.

Tight ranges usually result in a strong trending move. A break and close above the neckline will complete the inverse head and shoulder pattern. The UNI/USDT pair could first rise to $31.41 before heading for the pattern target at $36.98.

The gradually rising 20-day EMA and the RSI just above the midpoint suggests a minor advantage to buyers. Contrary to this assumption, if the price plummets and sustains below the moving averages, a drop to $22 is possible.