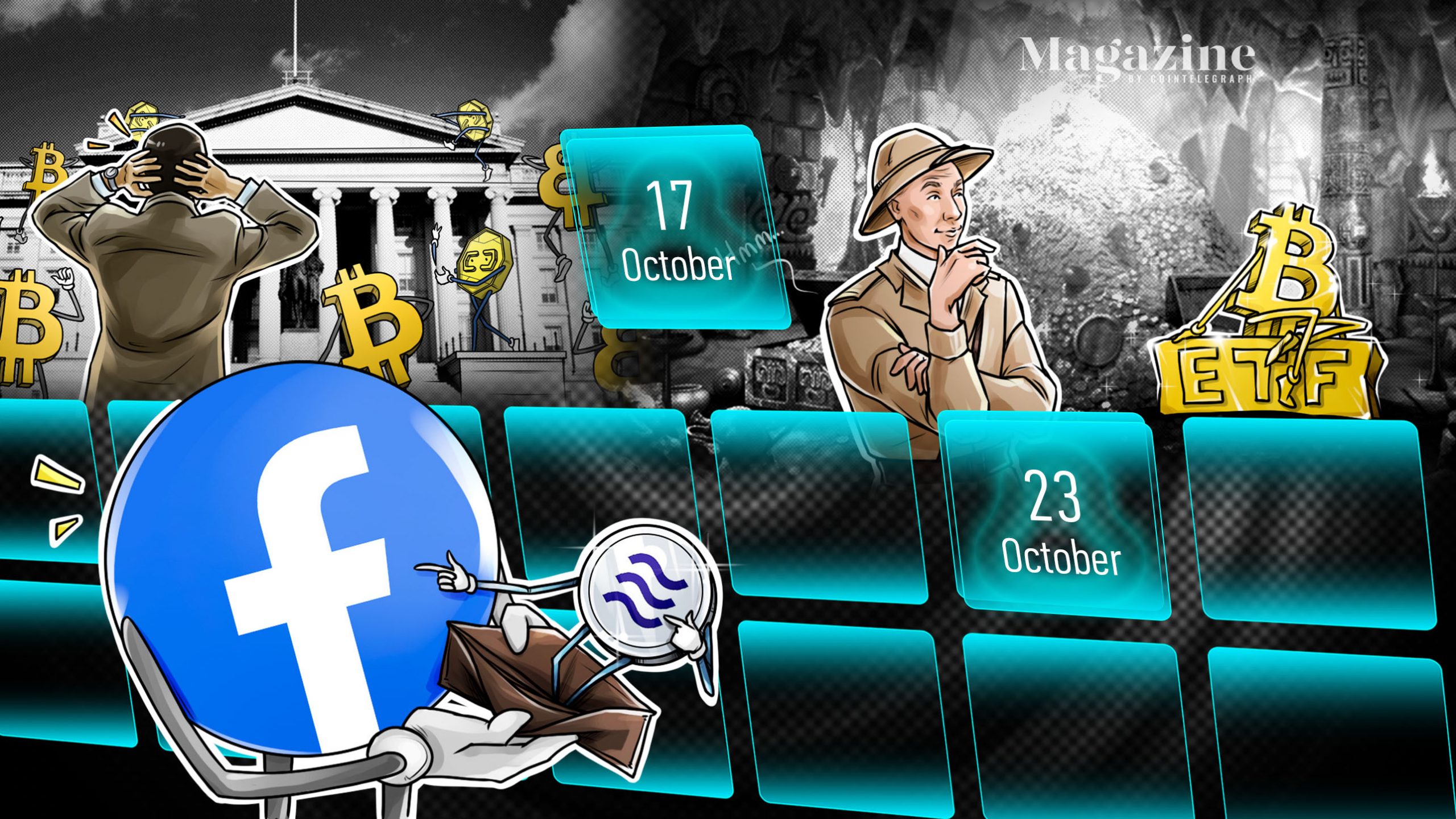 Coming every Saturday, Hodlers Digest will help you track every single important news story that happened this week. The best (and worst) quotes, adoption and regulation highlights, leading coins, predictions and much more a week on Cointelegraph in one link. Top Stories This Week Bitcoin officially hits new all-time high above $65K Bitcoin (BTC) surged […] 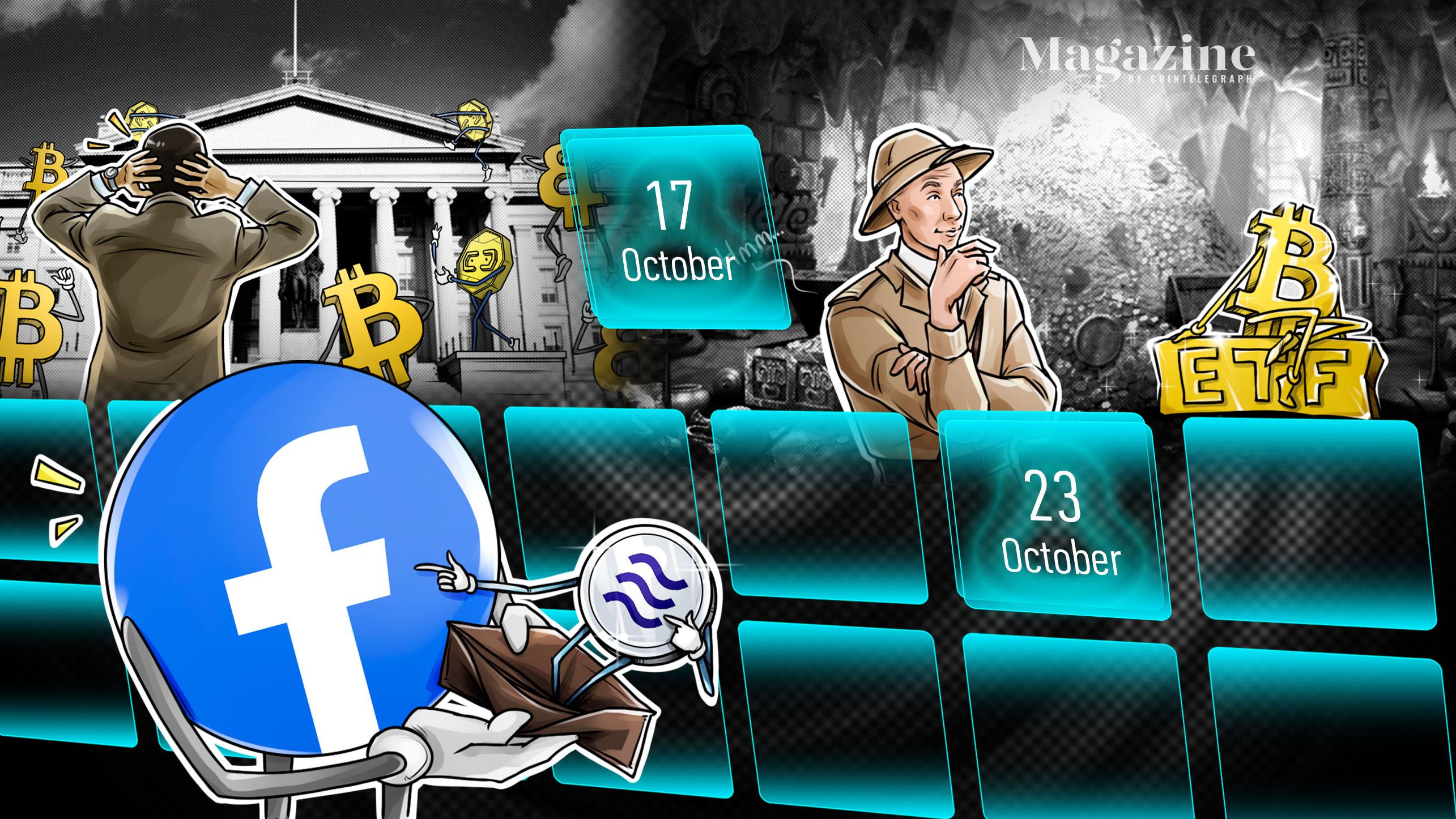 Coming every Saturday, Hodlers Digest will help you track every single important news story that happened this week. The best (and worst) quotes, adoption and regulation highlights, leading coins, predictions and much more a week on Cointelegraph in one link.

Bitcoin (BTC) surged to new all-time highs this week, breaking the former ceiling of $64,900 from April as the asset went into price discovery mode before topping out around $67,000.

The bullish momentum coincided with the successful launch of ProShares Bitcoin futures-based exchange-traded fund (ETF). Many onlookers are expecting the price to increase in the coming weeks and months, with the more optimistically inclined even suggesting that up to $300,000 is possible in the near future.

With Bitcoins market capitalization dominance at its highest since mid-May, many popular traders have stressed that now is the time to put a focus on digital gold and put the altcoin market on the back burner for the moment.

ProShares achieved a major milestone for the crypto sector this week after the firm debuted its Bitcoin futures-based ETF (BITO) on the New York Stock Exchange (NYSE) on Tuesday.

ProShares Bitcoin Strategy ETF saw around $1 billion in volume on its opening day, with Bloomberg analysts stating that it was arguably the largest first-day volume for an ETF in terms of natural or grassroots interest.

After two days on the NYSE, Proshares ETF became the fastest fund ever to reach $1 billion in assets under management. Following Proshares ETF, many onlookers are waiting to see how the next in line performs. At the time of writing on Friday, Valkyrie just launched its Bitcoin futures ETF on the NYSE.

Top crypto exchange Coinbase has penned a deal with the NBA, WNBA, NBA G League, NBA 2K League and USA Basketball as part of a multiyear sponsorship deal. As part of the deal, Coinbase will work to educate basketball fans on crypto.

According to the NBA, Coinbase will create unique content, innovations, activations and experiences to help basketball fans to learn about the crypto space. The firms branding will also appear during the televised games.

The move could be a real slam dunk for the industry in terms of mainstream adoption, with data from Statista showing that an average of 1.6 million people watched NBA regular-season games across major networks during the 20192020 season.

Mariah Carey, the pop icon behind the divisive Christmas song All I Want For Christmas Is You, has partnered with the Winklevoss twins crypto exchange Gemini to promote Bitcoin adoption and support girls of color in their pursuit of STEM degrees a broad education category that refers to science, technology, engineering and mathematics.

In a video to her 10.2 million Instagram followers, Carey said shes a Bitcoin investor and offered her fans a referral code to redeem a whopping $20 in free BTC.

Her promo deal is linked to charitable causes, as users who sign up through the referral link and trade digital assets on Gemini will be contributing directly to Black Girls Code, a nonprofit organization that provides technology education for African-American girls.

Brazilian toddler makes over 6,500% profit on her first Bitcoin holding

A four-year-old hodler from Brazil has earned more than 6,500% in profit on her first Bitcoin. The girl’s father, Joo Canhada, gifted 1 BTC to his newborn in 2017 when the asset was priced at around $915.

Canhada is the founder of Brazilian crypto exchange Foxbit, and stated that he bought his daughter Bitcoin not just as a gift, but as a way of investing in the emerging crypto sector. It appears that he was at the right place at the right time, as the price of Bitcoin went on to surge to $20,000 at the tail end of 2017.

While there have been many bumps along the road, Bitcoin was worth around $61,000 at the end of the week, suggesting her profit now sits at roughly 6,560%. 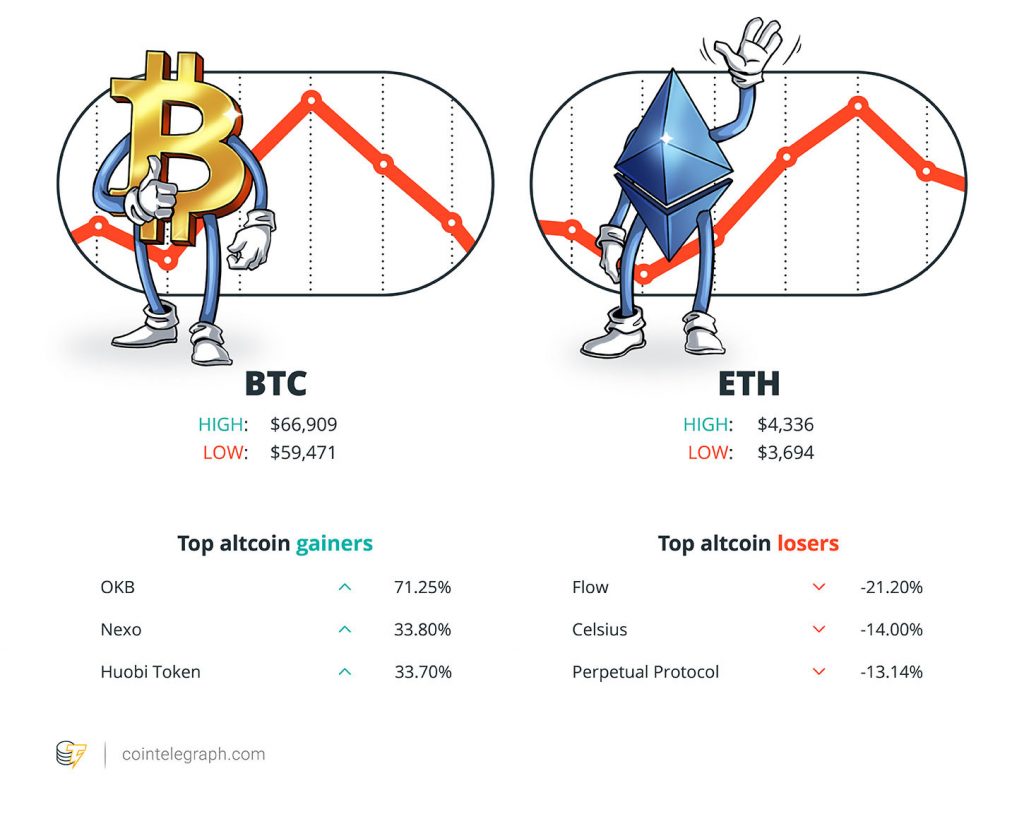 For more info on crypto prices, make sure to read Cointelegraphs market analysis.

If left unchecked, these digital assets and payments systems could harm the efficacy of our sanctions.

U.S. Department of the Treasury

We’ve got a lot of smart guys working at Icahn & Company, and we just dont understand Bitcoin. Im not saying its bad or good, Im just saying we dont understand it. Were not going to invest in something we dont get. […] The jury is really out on whether Bitcoin has intrinsic value or acts as a store of value. If inflation gets rampant, I guess it does have value. There are so many variables, it is a very difficult thing to invest in.

Theres a lot of history here. We think it’ll track quite well and, most importantly, we think that a combination of a regulated futures market and a 40-act ETF will really open up the opportunity to conveniently get Bitcoin exposure to a lot of folks who may have been waiting on the sidelines.

To protect consumers and reduce costs, we encourage the streamlining of state-level regulatory frameworks for stablecoins and the issuance of special-purpose charters by federal banking regulators for stablecoin companies seeking to operate nationally.

The Chamber of Digital Commerce

DAOs do not clearly fall within any of Australias existing company structures. […] This regulatory uncertainty is preventing the establishment of projects of significant scale in Australia.

Diem is not Facebook. We are an independent organization, and Facebooks Novi is just one of more than two dozen members of the Diem Association. Novis pilot with Paxos is unrelated to Diem.

Weve made a lot of noise in the last few months about getting hyperactive in cryptocurrency.

Prediction of the Week

Bitcoins price favored north this week. According to Cointelegraphs BTC price index, the asset broke its previous all-time high just shy of $65,000, going on to reach $67,000 amid a week filled with Bitcoin ETF headlines. Bitcoin cooled off following its surge, however, dropping back down to the low $60,000s.

Several people weighed in on potential upcoming price action for Bitcoin. The Twitter account for E-Club Trading, an investment analysis organization, mentioned a level around $58,000 as one potential landing zone if Bitcoin loses the $62,000 level.

FUD of the Week 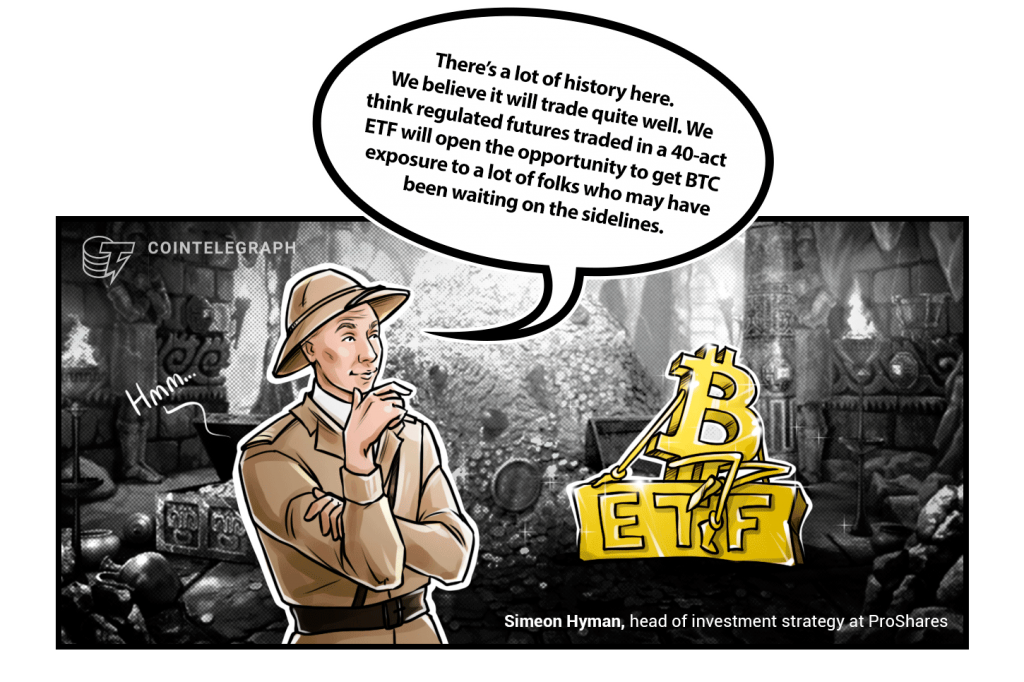 New York Governor Kathy Hochul received a letter this week urging her to deny permits enabling the conversion of the citys old fossil-fuel power plants into crypto mining centers. The power plants in question are the Greenidge Generating Station and Fortistar North Tonawanda Facility, which now are the target of ambitions to mine and hodl at full throttle.

The letter was co-signed by a long list of local organizations, businesses and labor groups, who banded together to voice their concerns over the energy-intensive poof-of-work crypto mining model.

Proof-of-Work cryptocurrency mining use enormous amounts of energy to power the computers needed to conduct business should this activity expand in New York, it could drastically undermine New Yorks climate goals established under the Climate Leadership and Community Protection Act, the letter read.

NYAG directs 2 crypto firms to shut down, investigates 3 others

Speaking of New York, the states attorney generals office went after five local crypto firms on Monday, ordering two unnamed companies to shut down operations, while launching investigations into the other three.

The attorney general’s office alleged that the two firms engaged in unlawful activities, and requested details on the other firms lending products, policies, procedures, clients in the state and other relevant information.

One of the three crypto lending firms under investigation is Celsius Network, with the firm confirming the news in a blog post on Tuesday. Celsius said it is working on providing regulators in New York with info regarding its business.

In what may or may not be FUD depending on ones views towards Facebook, the social media giant was urged by five U.S. senators to halt its crypto wallet just hours after its pilot program went live this week.

Facebooks Novi wallet launched a pilot in the United States and Guatemala on Tuesday in partnership with Coinbase, but the group of senators, which included crypto skeptic Elizabeth Warren, werent having it. In a letter sent to Facebook CEO and meat-smoking enthusiast Mark Zuckerberg, the senators voiced their strongest opposition to Facebooks revived effort to launch a cryptocurrency and digital wallet.

Facebook cannot be trusted to manage a payment system or digital currency when its existing ability to manage risks and keep consumers safe has proven wholly insufficient, the letter read. 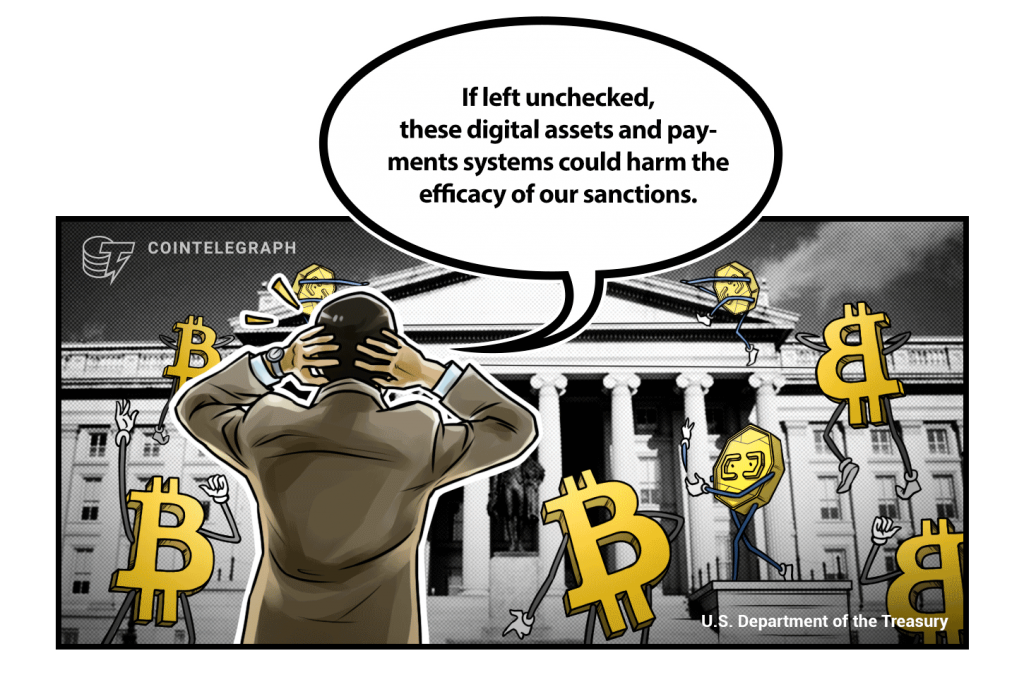 Sadly, there are several reasons why the blockchain community has fallen short in making privacy a tier-one priority, and that must be changed.

Lushsux: A decade of ass-whoopin’ and skullduggery in a single NFT

Generally, when Ive got things successful, its just through a bit of skullduggery.

Bitcoin futures ETFs: Good, but not quite there

With a Bitcoin futures exchange-traded fund, getting exposure to the worlds largest cryptocurrency will be easier than ever.