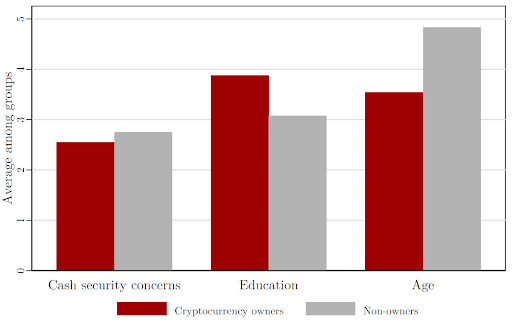 What Drives Crypto Users? Distrust of the System or Speculation?

The rise of bitcoin, ether, Cardano’s ADA and related cryptocurrencies – with market capitalizations returning to all-time highs and at times rivaling that of metals like silver and the world’s major financial companies – warrants an examination of investor views, characteristics and sophistication. One motivation for creating these digital assets was finding a substitute to […]

The rise of bitcoin, ether, Cardano’s ADA and related cryptocurrencies – with market capitalizations returning to all-time highs and at times rivaling that of metals like silver and the world’s major financial companies – warrants an examination of investor views, characteristics and sophistication.

One motivation for creating these digital assets was finding a substitute to fiat money and commercial banking with a new form of exchange that is resistant to debasement and censorship by governments, international organizations and financial institutions. Bitcoin’s creator, Satoshi Nakamoto, highlighted that we needed an electronic payment system that allowed us to make transactions without a third party. Also, one of the founders of Ethereum, Vitalik Buterin, considered “non-discrimination and non-censorship” one of the key principles behind Ethereum’s design.

Looking at this issue in a BIS working paper, we use data from the “Survey of Consumer Payment Choice” (SCPC), a dataset that is representative for the U.S. population and spans the period from 2014 to 2019. Our working paper shows there is no evidence to support the hypothesis that cryptocurrencies are sought as an alternative to fiat currencies or regulated finance in the U.S. Compared with the general population (see the first two columns of the chart below), cryptocurrency investors do not have heightened concerns about the security of mainstream payment options such as cash or commercial banking services.

We find that cryptocurrencies remain niche markets dominated by young, male, educated investors. In fact, one of the main socioeconomic determinants of U.S. cryptocurrency investors is educational attainment. Being young is also associated with a higher likelihood of owning at least one cryptocurrency.

In our BIS working paper, we have analyzed data up to 2019. Have the patterns changed during the COVID-19 pandemic? It may be that recent crypto hype might have changed the composition of investors.

Figure 2 uses data from the “Survey of Consumer Payment Choice” for the year 2020 that has recently become available. The 2020 survey was conducted during October. There was a higher demand for cryptocurrencies during the pandemic. In fact, the pool of investors was much wider in 2020 than in 2019. According to the data, almost 4% of U.S. citizens own at least one cryptocurrency in comparison with the 1.9% of the previous year. Cryptocurrency adoption is becoming more widespread. There is also an upward trend in the number of people who know about cryptocurrencies (more than 72% in 2020).

Second, the right-hand side of the chart below shows that while there is still no distrust, investors are becoming more like the average population. Again, there are not a lot of differences with respect to the concerns of the security of cash (see left-hand columns). However, cryptocurrencies have been adopted by less educated people than in 2019.

The average age of cryptocurrency investors has also increased. This means cryptocurrencies continue to be owned by young, male and well-educated investors, but the differences with the general population have become smaller over time. As hype around the cryptocurrency sector has increased, more “standard” investors became interested in and attracted to this asset class. 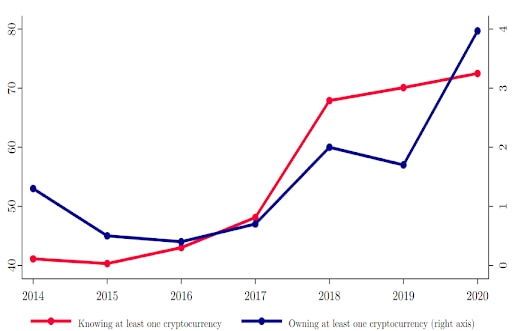 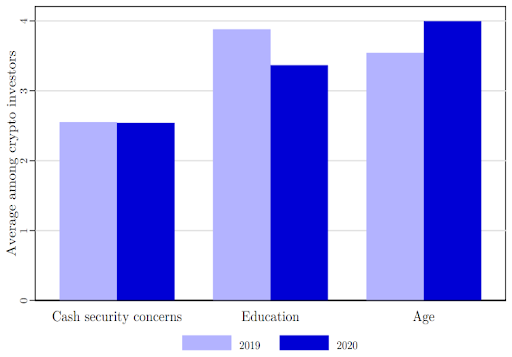 It is crucial to comprehend whether the continued rise of cryptocurrencies could indicate growing distrust in today’s regulated financial markets and monetary arrangements. We find that this is not the case.

From a policy perspective, if the objectives of investors are the same as those for other asset classes, so should be the regulation. Cryptocurrencies are not sought as an alternative to fiat currencies or regulated finance, but instead are a digital speculation asset. More recent data also shows that crypto investors are becoming more like the general population, i.e., cryptocurrencies are going mainstream.

We argue that a clarifying regulatory and supervisory framework for cryptocurrency markets may be beneficial for the industry in a context where cryptocurrencies are being targeted by less-educated investors and adoption is becoming widespread.

Nevertheless, one important consideration concerns how one could apply technology-neutral regulation, while at the same time harnessing the potential of the technology itself in the supervision process. One option for such a framework is “embedded supervision.” This means implementing a supervisory framework for cryptocurrencies that allows for compliance to be automatically monitored by reading the market’s ledger.

The benefits of this framework are numerous. For instance, it may allow the regulator to ensure that all fund exchanges are backed by on-chain cryptocurrency holdings. By doing so, cryptocurrency investors would be fully protected because data delivery is automated and the regulator supervises the ownership balances in the blockchain.

The views expressed in this column are those of the authors and do not necessarily reflect those of the Bank for International Settlements. This op-ed is based on BIS working paper 951.