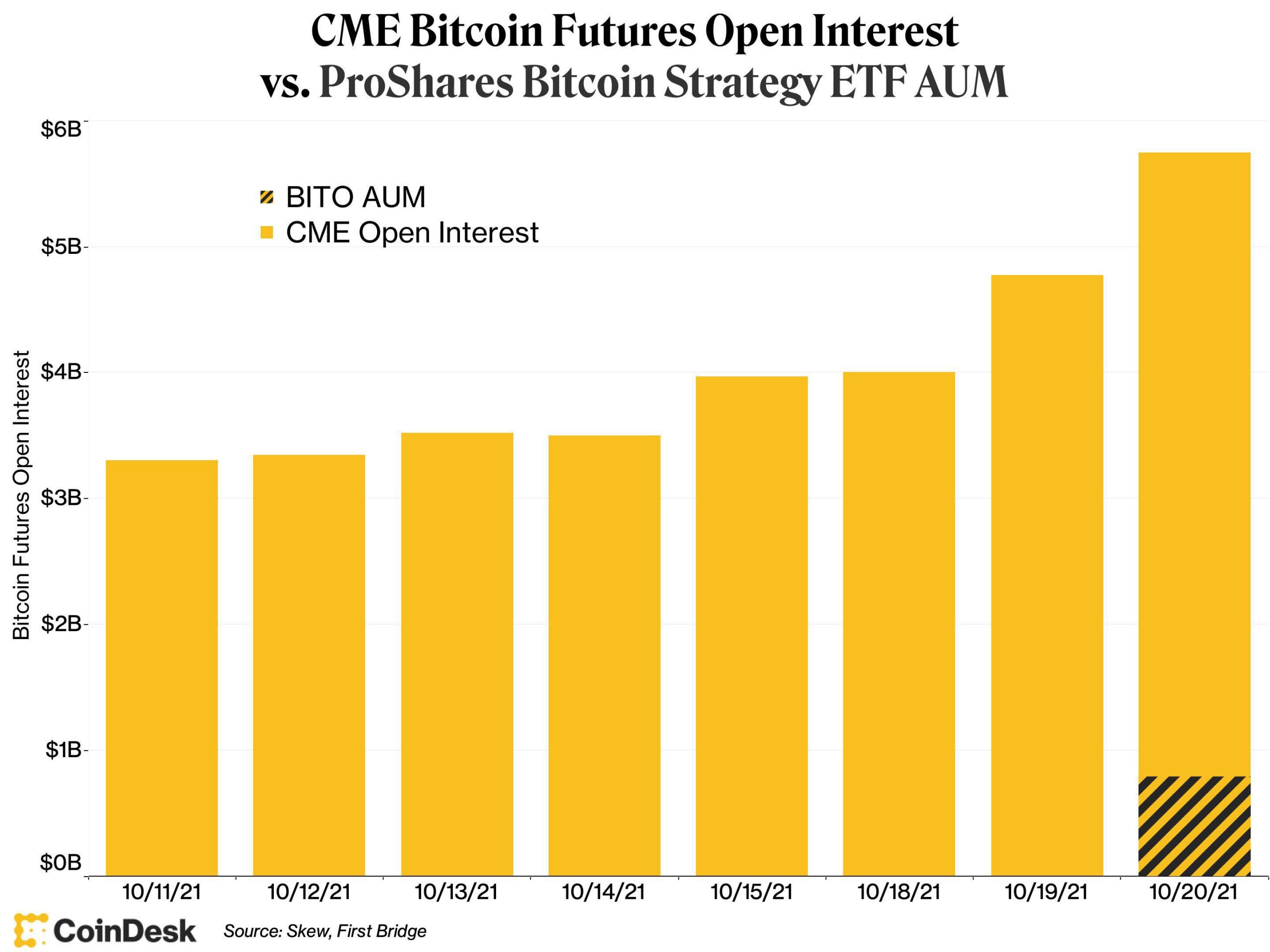 As the CME’s Volume Gets Pumped, the Bitcoin ETF’s Quirky Structure Could Explain Some of It

Last week’s launch of the ProShares Bitcoin Strategy ETF (BITO) was a smash hit by any measure. Yet it may be that at least part of its success could in part be the result of how the instrument is structured rather than pure demand from buyers hoping for bitcoin exposure. In just a few hours, […]

Last week’s launch of the ProShares Bitcoin Strategy ETF (BITO) was a smash hit by any measure. Yet it may be that at least part of its success could in part be the result of how the instrument is structured rather than pure demand from buyers hoping for bitcoin exposure.

In just a few hours, the exchange-traded fund (ETF) amassed $570 million in assets under management (AUM), making it one of the most successful debuts of an ETF in history. Within a few more hours, that number just about doubled.

You’re reading Crypto Long & Short, our weekly newsletter featuring insights, news and analysis for the professional investor. Sign up here to get it in your inbox every Sunday.

BITO’s assets are mostly invested on the Chicago Mercantile Exchange (CME), which saw an expected increase in both open interest and volume for bitcoin futures. One question is whether some of that volume could be the result of traders positioning for profit from the way this particular ETF is structured.

Currently, for every dollar it takes in, ProShares allocates 40.2% to buying CME bitcoin futures contracts that settle in October and 31.2% for futures that settle in November. The remaining 28% or so is put in U.S. Treasury bills. Reminder: On the CME, bitcoin futures are settled in cash, meaning no actual bitcoin changes hands. It’s basically a side bet on the price of the asset.

From Monday to Wednesday, open interest soared to $5.745 billion from $4 billion, an increase that was more than double the ProShares ETF’s holdings.

Meanwhile, volume was up, too, to levels never seen before on bitcoin futures: Tuesday saw $5.9 billion in futures change hands on the CME, and Wednesday’s figure was north of $7.5 billion. In the 19 trading days prior, the average was $2.5 billion per day. 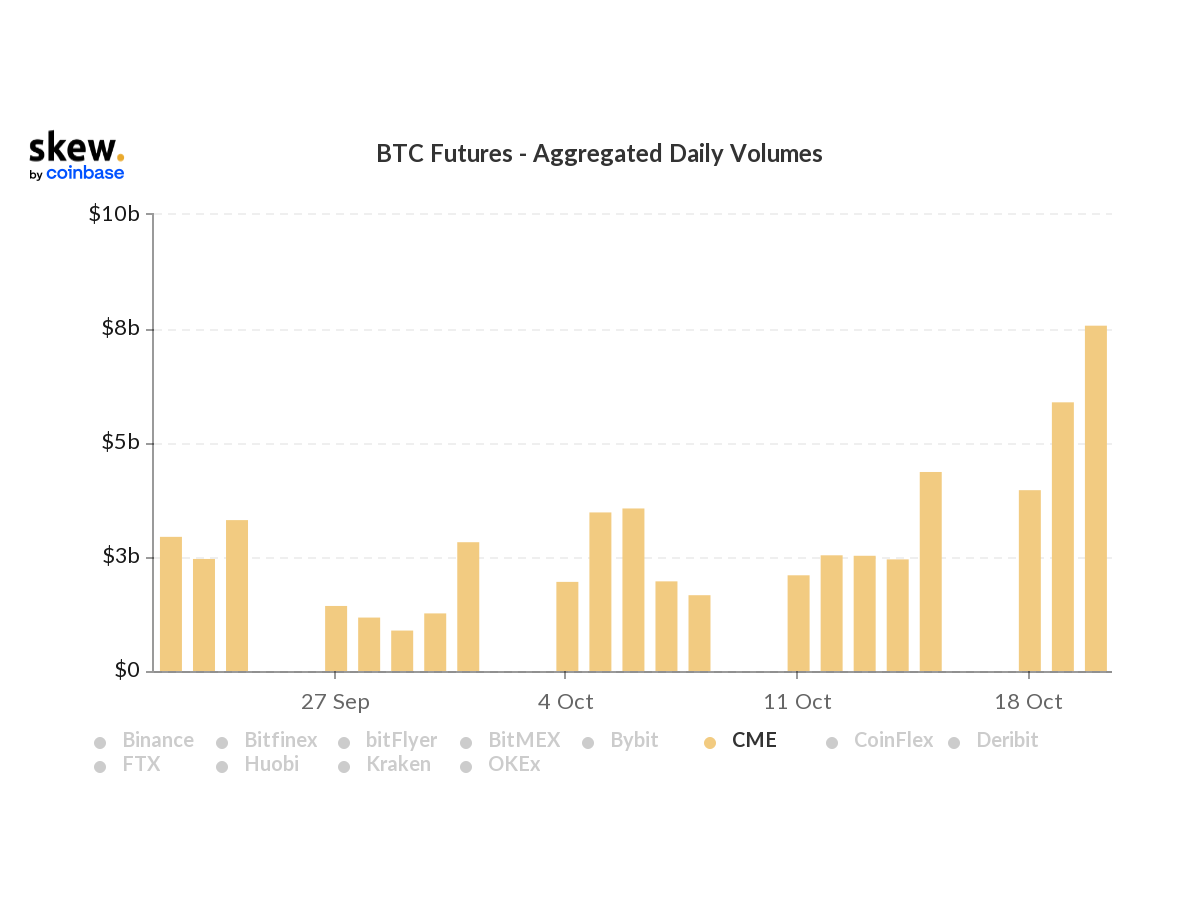 Here’s where it gets interesting.

BITO isn’t structured like a typical stock ETF. Rather, some of its features are more likely to be found in ETFs that own bonds and other types of financial instruments.

With a lot of stock ETFs, “authorized participants” (APs for short) accumulate and deliver a basket of shares to the ETF provider in exchange for shares in the ETF in a rather Biblical-sounding process called “creation.” APs aren’t average Joes, however. They are institutions and the like that can do this sort of thing in bulk and have the sort of relationships that allow such a trade to take place.

The APs do this kind of a trade if the value of the ETFs they get in return (which they then can sell in the market) is significantly higher than the stocks they deliver. And by “significantly higher,” we’re talking just 1%. That may not sound like a lot for a retail trader hoping to win big on something she saw on Reddit, but for institutions that do trades in the millions, this starts to add up to real money.

The also-Biblical-sounding “redemption” process is the reverse of the creation process, where APs get a basket of shares in exchange for redeeming their ETF shares to the provider. (ETF.com has a nice little primer on all of this, if you’re so inclined.)

BITO, though, does something similar to bond ETFs called “cash creation,” meaning the AP delivers cash rather than the underlying asset to the ETF provider in exchange for shares.

That could make for some quirky movements in the market, as noted in a Twitter thread by Dave Nadig, chief investment officer and director of research for news and data sites ETF Trends and ETF Database.

Pump up the volume

If BITO were to trade well above fair value during a hot trading day – say, the day of a long-anticipated premiere for an SEC-regulated bitcoin ETF – an AP could sell shares of the ETF “naked,” effectively short without borrowing (the minimum size the AP can create is 10,000 shares or about $4 million-worth as of Thursday). Simultaneously, the AP could offset much of that risk by buying futures on the CME or even some other bitcoin-related asset (bitcoin itself or shares of MicroStrategy or whatever).

At the end of the trading day, the AP would give cash to the ETF provider (in this case, ProShares) in exchange for shares of BITO. ProShares then would take the money and buy futures contracts on the CME because that’s what it’s supposed to do when an AP gives it cash. At the same time, the AP would most probably (though it’s not a given) unwind that hedge taken in other bitcoin assets when it initiated the short earlier in the day.

Again, should this trade get done by more than a few APs, prices of BITO and bitcoin futures would theoretically start to converge, though up to a point. The maximum amount of October bitcoin contracts an entity can hold is 2,000 and up to 5,000 total for all expiries; each contract holds five bitcoin. (BITO is now just about at those limits and the CME is set to increase those limits.)

All this could do a funny thing to volume, though. “AP activity will show up in underlying [CME contracts] twice,” tweeted Nadig. “One quick hedging round trip, followed by one long position until roll/redemption.”

As it turns out, the ratio of volume to open interest in CME bitcoin futures averaged 1.3x Tuesday and Wednesday compared to a 1.0x over the previous 19 days. Thus, open interest those two days averaged $5.3 billion but volume averaged $6.7 billion.

That’s not saying $2.8 billion in above-average volume was necessarily the result of APs seeking out arbitrage opportunities. Indeed, Nadig, speaking to CoinDesk, made it clear that he didn’t know if it happened at all.

Nonetheless, the outsized spike in volume relative to open interest indicates that traders were doing at least some amount of flipping.

Thus when looking at data price and volume data, it helps to remember that sometimes how an instrument is structured can explain some of it.

In the end, if one wants to own bitcoin, the purest play is buying bitcoin itself. Everything else comes with its own idiosyncrasies.